BACK TO HOME > History > Unternehmen Moewe 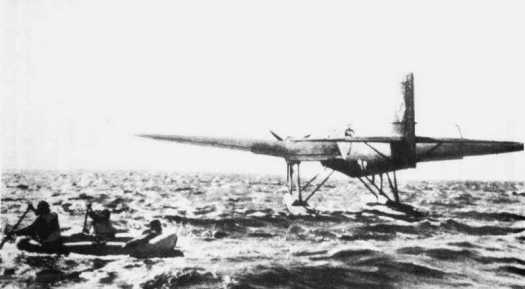 Image: Agent “Vera” and her two male companions training a landing September 1940 outside of the Norwegian coast using a Heinkel He 115 and a rubber dinghy. Picture allegedly taken by one of the instructors. It is not directly related to the Moewe operations, but Moewe V used similar equipment.

Throughout World War II, many men and women lost their lives in small, secret operations, many of whom we’ll never learn about, nor the very private destinies and tragedies involved. This paper is a small contribution in memory of these soldiers and civilians who never made it into any historical records.

During World War II, all figthing parties conducted a substantial amount of clandestine operations where agents were dropped behind enemy lines. Many of these operations have been covered in-depth by numerous authors, whereas other operations seemingly have gone unnoticed; at the most receiving a small side note in the records. This paper takes a look at a German series of secret operations called Moewe, small “Unternehmen” which obviously hasn’t received much of any coverage in the historical records.

My research pertaining to the Moewe operations began back in 1995. So far I have been able to dig up some information on Moewe I and V. This, and related pages will continuously be updated as more information is retrieved; I’m especially hoping for more information on the latter operations. A trip to the military archives in Freiburg/Germany is planned and I’m hoping that this will prove fruitful.

There is a reference and a bibliography section included at the end of this page. If you are able to provide me with any kind of information pertaining to the operations, I would very much like to hear from you 🙂 Please note that the information contained here is under copyright: if you want to refer to it or use any parts, please get in touch with me before you do so 🙂

There are several pages located on this site which are more or less directly related to the Moewe series:

Major resources throughout my research have been literature and e-mail correspondence with several friendly people, notably Matthias C. Noch who’ve provided me with invaluable information regarding the Moewe V operation.

I would also like to express my sincere gratitude to the following people who have been very kind providing me with additional information and insight:

Andreas Didszuhn for providing me with lots of information pertaining German insignia and other hints.

Olve Dybvig and Kjetil Korsnes for lots of information on the He 115’s and units in Norway.

Matt Gibbs for checking out with the Imperial War Museum in London.

Chuck Genthe, Jack Hammond, Rob Land, Ben Moon, Bob Naborney, Dough Richardson, Jim Ryan, Simon Spanton, Ian Stafford, Hal Turell and Gregory G. Wilmoth at the CompuServe MILFORUM for additional information on paratroopers, gliders and radar coverage in the UK among others. It was a great pleasure to be able to discuss aircrafts and other things with the WWII veteran Mr. Turell.

This page (and all the others on this site) is not politically coloured nor does it try to revise history in any way. It does not try to judge or glorify the accounts presented nor the individuals involved. The information is believed to be correct, though no one shall be held liable for the (in)accuracy of any of the presented information – and as so often, you can bet upon that something went wrong in the process. Please forward any corrections and/or ideas to Bo Stahlbrandt or use the discussion forum.

The German military secret service, commonly known as the Abwehr, conducted a small series of secret operations under the code name of Unternehmen Moewe (operation Seagull) throughout World War II. These operations are not to be mixed up with the British special forces’ operation Seagull, conducted against the Arendal smelting works and other plants in Norway June 1944 [1].

The Moewe operations were of such a small scale, that they have received little to no attention in commonly available history literature. Another likely reason for them not being mentioned is the destruction of archives in later stages of the war.

I have yet not been capable of getting the total number of operations conducted within the Moewe series, but they were at least five and not likely many more, since Moewe V took off in September of 1944, only some eight months before the end of the war in Europe.

Based upon the gathered data, I have come to assume the following:

1. The series targeted the British Isles.

2. Had a main mission of sabotage, reconnaissance and damage assessment.

3. Were all conducted using aircraft to transport the agents to (or nearby to) the target area.

4. Were supervised by the Abwehr, department of foreign affairs and espionage (Amt Ausland/Abwehr) which was located in Berlin. After June 1st 1944, basically the complete Abwehr was integrated into the Reichssicherheitshauptamt, department of foreign secret services (RSHA Amt VI, Auslands-SD) – It must’ve been the RSHA Amt VI which dealt with at least Moewe V.

5. Moewe operations prior to June 1944 were likely under the command of the Abwehr facility (AST, Aussenstelle) Hamburg, which was its largest facility [Uwe 1].

6. Due to the mix of missions, such as sabotage and damage assessment, probably a joint operation utilizing personnel from several different branches of the Wehrmacht and the Luftwaffe.

The first operation with the code name of Moewe I was conducted 1942, as the balance began to swing in favour of the Allied Powers. As this turns obvious to Hitler, he becomes even more strident in his demands on the Abwehr for attacks on the British aircraft industry.

It was to meet these demands that an elaborate plan was drawn up to strike at the very vitals of the British aircraft production, the two great aluminium plants in the western Highlands, at Kinlochleven and Fort William, near the southern end of the Caledonian Canal. For this operation, a Glasgow-Irishman was given extensive training by the Abwehr industrial experts at Tegel in Berlin.

About midsummer 1942, General von Lahousen, head of Abwehr II, notes in his war diary that he had given final approval for the dropping of the man by parachute, namely “in the area south of Glasgow“, where Deputy-Führer, Rudolf Hess, had led the way a year before. From the dropping area, Lahousen noted, the man would contact the Irish friends in Glasgow and with their aid attempt to form a three-man sabotage group. He mentioned the target for the operations as: “Sabotage measures to interfere with the aluminium works at Kinlochleven and Fort William, and the associated hydro-electric installations“, very likely the tunnel through Ben Nevis.

For some reason the operation does not appear to have taken place. In records, Lahousen himself could not recall any details and the managers of both plants also failed to trace any evidence of sabotage. In one record, the manager of the north British aluminium plant Fort William mentioned: “There were of course several air-raids on the factory, but even if they were intended, it would not seem that any parachute or sabotage attempts were actually put into operation“. [2]

So, in all, it seems like Moewe I was a total flop.

The preparations for the later Moewe operations, or, for at least Moewe V, starts in July 1944. Moewe V is conducted in September 1944 utilizing a Heinkel He 115 seaplane starting from a secret base in Norway (very likely Norway, but there’s a small chance that it was launched from Denmark). Target area is the Scottish coast and on board the aircraft are five agents – probably causing it to be fairly crowded. Since it was a seaplane, one must assume that it was planned to let the agents get ashore using rubber dinghy’s, just as it’s been done in earlier operations with He 115’s [Noch 1].

The He 115’s were removed from active front duty and relocated to other services in the summer of 1944, where the sea rescue got a couple and KG 200 got one [Olve 1] (Question: is this the 3./KG 200 in Rissala/Finland?). The II./KG 200 launched operations from Stavanger and from Thirstrup, Denmark [Gellermann 5], though no records mention utilization of He 115’s by this wing from these locations.

The probable mission was sabotage and damage assessment caused by the V2 launching against London, which had started September 8th 1944, 18:38 from an eastern suburb of Den Haag – some five minutes later the first V2 hits Chiswick/London (18:43 British daylight savings). The Germans were interested to find out the best targets for future V2 rocket launches including damage assessment – this was likely the main mission for the latter Moewe operations.

As the He 115 reached the Scottish coast, it was shot down by a Spitfire. The crew of the machine probably died, since the machine was written off as a complete loss (“Totalverlust”), something which automatically meant that the crew had died or was completely missing.

The destiny of the five agents is unknown. If the agents would’ve survived, they were probably taken to a secret place for interrogation. Information pertaining the mission goals gave the interrogators clues about the level of knowledge held by the opposite side. This type of data, combined with the enemy’s major field of interest, were very valuable since it could be used for contra-espionage purposes. The agents were often killed after such interrogations, though on some few occasions they were lucky enough to be used for propaganda purposes or exchanged against own agents [Noch 1].

A very rough estimation of the distance between the home base and the target area is 1200 km. This is based upon an assumed base somewhere in north of Norway and a drop area located at the northern coast of Scotland. If the He 115 was flying at the normal cruising speed of 275 km/h, it would’ve taken it some 4h 20min to reach the location.