BACK TO HOME > History > Ingiald Ill-Ruler, the meanest man of Swedes 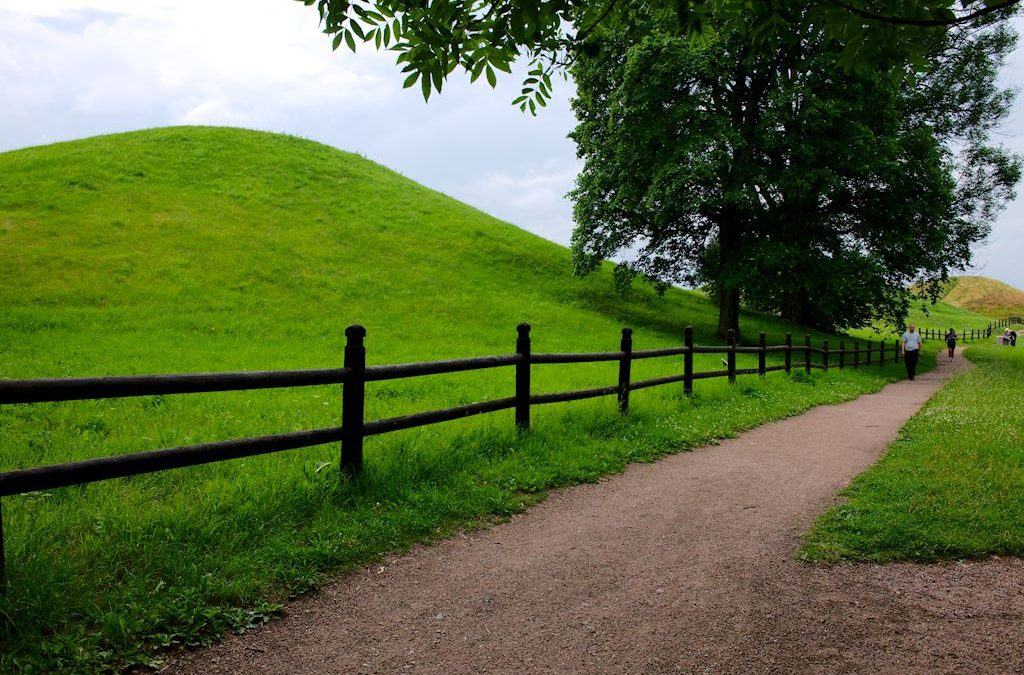 Image: The King Mounds at Gamla Uppsala. This is Uppsala which was seat of the Svea’s. The mounds date from different time periods and some are graves, others have had other functions. Recent archaeological works have been executed in the area thanks to infrastructure works such as the motorway E4 and a new rail road passing by.

This paper contains information on the Uppsala King “Ingiald Ill-Ruler” or “Ingjald illråde” in Swedish. Any corrections and comments are welcome.

Ingiald Ill-Ruler is one of the main characters in the description of how Sweden became one country, as described by the Icelandic historian Snorri Sturluson (dead 1241) in the “Heimskringla”-part of “Ynglingasaga”. This work by Snorri is a mix of fiction and history, based upon the older “Ynglingatal” from the 9th century. Snorri was not only a historian, but also a great author.

Since the era of the Uppsala king Ingiald, laid some 600 years back, one must assume that a lot of details were missing, and here Snorri used fiction to fill in the holes. According to the tales, Ingiald was the man that united Sweden. Critical historians say that we cannot put too much belief in the writings regarding Ingiald, since we know that other parts of the work is at least partially wrong, yet the work also holds pieces of valid historical information. According to the sagas, Ingiald existed, but we cannot take that for granted.

First some short background. Ingiald was one of the members of the “Ynglingaätt”, a line of ancestors, a dynasty that should have provided the very first kings in Sweden. Their first king, according to Snorri, was Yngve-Frej which was another name for the god Frej (“Frey” in English). So, this “ätt” originated from the gods according to the tradition.

The older members mentioned in Ynglingatal, are probably nothing but myth-figures, whereas a series of the later ones (probably from the end of the 5th century) are meanwhile considered to be historically correct [1]. Ingiald’s father, Broet-Anund, ruled over Tiundaland [2]. In Fjärdhundraland, a “small-king” called Ingvar ruled. One day Ingvar came to visit Bröt-Anund, bringing his son Alf with him. Alf was of the same age as Ingiald, also six years old. The boys played as boys do and Alf was the stronger of the two – he could beat Ingiald making him weep. Ingialds stepfather, Svipdag, thought it was a great shame that Ingiald got beaten up in such a fashion, so he gave Ingiald the fried heart of a wolf to eat. According to Snorri, this diet caused Ingiald to become the vicious person which later should be his characteristic sign.

The time passed by and Ingiald took over the throne of his father Bröt-Anund. As a king, his first responsibility was to manage a party and serve the funeral beer. For this purpose, he had a large hall built, also known as the “Seven Kings Hall” (“Sjukonungasalen”) [3] with seven high-seats (“högsäten”). He sent out invitations to all kings and jarls in the Svea country (“Svitjod”/”Svetjud”). The above mentioned Ingvar and his sons came, the king of Götaland, Algot came, king Sporsnjall of Närke and king Sigverk of Attundaland came too. The king of Södermanland, Granmar didn’t show up though.

During the party, king Ingiald made a “Brage-promise” (“Bragelöfte”), which should have worried and astound the guests; he swore that he would expand his country, doubling its size in every direction. During the following night, he sat fire on to the building and all the other royal families found their death in the flames. After this episode, Ingiald conquered one after the other of their countries. He fought several wars with Granmar of Södermanland and at last he succeeded in overrunning his country. Also Granmar met his destiny in flames on the island Sela. This seems to have been a popular killing method back then…

Together with his just as vicious daughter Aasa, Ingiald himself found his death, burnt in flames by a man called Ivar Vidfamne after he had lost a battle against him. The son of Ingiald, Olaf, now fled westwards, to the deep forest of Värmland. He cut down trees with such an energy that he was called Olaf Tree-Hewer (“Olof Trätälja”). Some of the inhabitants were though upset with Olaf and sacrificed him to the god Odin, since they were short on food and thought he hadn’t done enough for them. The son of Olaf Tree-Hewer, Halfdan White-Leg (“Halvdan Kvitbein”), married and got a country in what later would be Norway. One of his descendants, Harold Fair-Haired (“Harald Hårfagre”), would be the first king of Norway.

[1] Some of the members of the “Ynglingaett” was Aun, Egil and Adils (“Eadgils” in the Beowulfs-prose from the 8th century). These are assumed to have been burried in the king graves (soil piles) in Uppsala, yet there are indications that maybe not all three are burried there. According to Ynglingatal, Aun and Adils died and were burried in Uppsala. Ynglingasaga also states that Egil was burried there.
Aun might have died 475, Egil died before 521. Ottar (“Othere” in Beowulf), another member of the aett and the father of Adils, might have been burried in Vendel (close to Uppsala), in the pile which is traditionally called “Ottar’s pile” (“Ottars hög”). He might have died around 525. Adils probably died around 550-575 and was then burried in Uppsala. We cannot be sure if Ale (“Onela” in Beowulf), another member of the aett and a brother of Ottar was burried in Uppsala. Some historians believe though that it is he who was burried in Uppsala, rather than Egil.
The whole story about Egils death is based upon a misinterpretation which as has been shown by the historian Sune Lindqvist; neither Ynglingatal nor Beowulf mentions anything in this direction. The latter even mentions that Egil died in a battle against the Geates at an old age, after he had escaped to a fort. This fort was probably located within the area of the Sveas, but it is not clear where it happened. Summary: One can only say with some certainty that Aun and Adils were burried in Uppsala.

[2] Fjärdhundraland (also “Fjädrundaland”), Tiundaland and Attundaland were the three “Upplandish folklands”. There were in all 15 such “lands”, or counties making up the country of the Sveas according to the “Florens record” from approx. 1120: Ostergötland, Västergötland, Västmanland, Södermanland, Närke, Tiundaland, Fjärdhundraland, Attundaland, Gotland, Värend, “Findia”, Estland, Hälsingland, Värmland and Tjust. The record is in latin and “Findia” can both mean Finland, as well as “Finnveden” in Sweden. One is not sure when the country was united, but it must have happened between mid 6th century to mid 11th century. Many indications point towards a unification in the Viking era.

[3] The hall was called “Uppsalir” by Snorri Sturluson, which is the plural form of “Upsal”, also used as the name of the city of Uppsala.