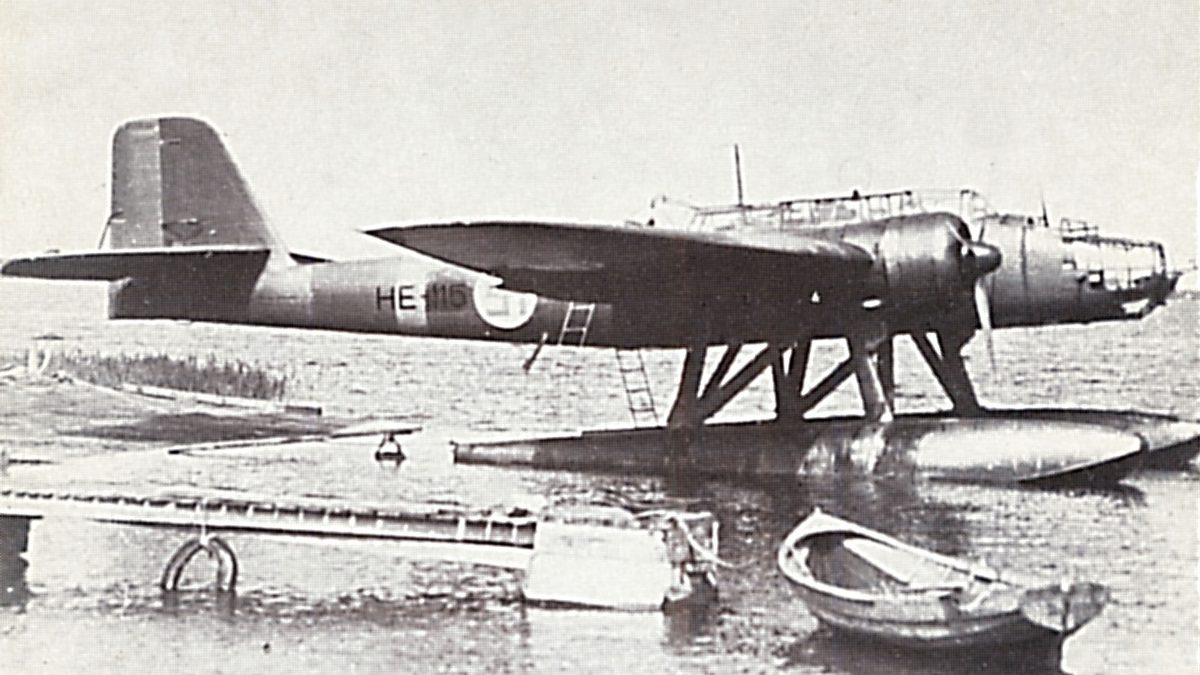 Image: HE 115 from the Finish Airforce. From Viimeinen partio Kannaksella, written by Esa Anttala. See also wikipedia’s entry on the HE 115

He 115 seaplane was a robust, multi-purpose seaplane. It was a two motor, three-seated middle winged metal construction with two floaters. First flight was 1936 with the prototype He 115 V-1 (D-AEHF). This prototype was modified and made a total of eight speed records March 20th 1938. A total of four prototypes were made; He 115 V-1 … V-4. The V-4 was used as blueprint (“Mustermaschine”) for the following pre-series (A-0).

The first true front tests were done by the Luftwaffe 1938 who’ve received ten He 115 A-0 early 1938. After the A-0, the Luftwaffe received the A-1, which was improved and designed especially for torpedo missions. The He 115 A-2 series, which was nearly identical to A-1, was built due to the strong foreign interest in the machine. A special version of A-2 for reconnaissance was exported both to Sweden and Norway before the war. By using a special adapter (“Rüstsatz”) it could be deployed for torpedo droppings.

The He 115 A-3 was delivered to the Luftwaffe already mid 1938. It was an improved version which could carry heavier loads.

The He 115 B-1 was used in the northern operational area. During the German attack on Norway, both the German and the Norwegian side had He 115’s and the Germans were attacked by Norwegian He 115’s while they landed. Some of the Norwegian He 115’s were flown over to England before Norway was completely occupied and three of those were used in the Mediterranean theater for secret operations. Note: the number of He-115’s utilized by the allies in the Mediterranean varies, at least one is on record.

Depending on operational use, the He 115 B’s had different adapters (Rüstsätze). The He 115 B-1/R1 had 2 cameras for reconnaissance. He 115 B-1 and B-2 were equipped with the adapter R 2 for bomb dropping (one 500 kg SC 500 or SD 500 “Sprengbombe”). Rüstsatz R 3 was used for mine dropping of a LMA III (500kg) or a LMB III (920kg) mine. Latter mine was only used in the Ice Sea. Sometimes, He 115’s flew cover for ships. They then used the R 4 adapter for smoke dispatching (“Vernebelungsgerät SV 300”). Such aircrafts were also used in the Mediterranean protecting the supply lines for the African operations. The general type of operations were though torpedo missions, where the He 115 carried one LTF5 or LTF6b torpedo.

He 115’s were used from Kirkennes/Norway for attacks on ship convoys. Kü.Fl.Gr. (“Küstenfliegergruppe”) 406 used the He 115B-1 for this. He 115 B was used as a bomb- and mine dropper and for torpedo attacks. He 115 C was equipped with extended weaponry. He 115C-4 was specialised for torpedo attacks.

The Luftwaffe used the He 115 for coastal reconnaissance and also for dropping parachute mines in the British waters.

Payload: Up to 1420kg of bombload, mines or torpedos

Normally the crew consisted of 3 men: Pilot, observer and radio operator. Pilot in the front of the cockpit, the observer in the front (belly) who also had to operate the movable MG15 (A-series). At the back edge and above the wings were the cockpit for the radio operator located. He had also to operate a movable MG15 in the B-series which pointed backwards. The middle section between pilot and radio op could partly be opened. There some cargo could be stuffed or 1-2 people seated. On espionage missions, two men and one rubber dinghy were stuffed there. Sometimes even a third person could be seated there, but then the rubber dinghy had to be stuffed in a small storage space in the right floater. On certain occasions, even a fourth passenger could be seated in the “Glaskuppel”.

On agent missions, the observer often also joined the others ashore, since one could do without him on the flight back. The space in the aircraft during such missions was very limited and it’s said that during unexpected jumps, ribs and other bones were broken. In the Moewe V operation it’s likely that one of the agents actually worked as observer during the flight, or else there would be hard to find space for all five agents.

The He 115 series were (according to Nowarra):

A-0: Pre-series of 10 machines, built according to the V-4 prototype. Tested in the troops starting summer 1938 as recon. and torpedo bomber.

A-2: Six machines were built for Norway and ten for Sweden. Smaller changes were made compared to the A-1. Delivered without any military equipment. Norwegian machines should have been given to Finland after 1940.

B-2: Small series. Similar to B-1 but with “ice sleds” (“Eiskufe”) mounted under the floaters.

C-4: 30 machines taken from the C-1 series, but with no weapons, except for one MG 15. Built solemnly for torpedo purposes.

This is an archived page and no updates have been made to it in many years, never the less, it is copyright (C) 1999, 2019 by Bo Stahlbrandt